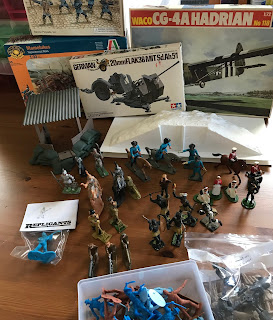 In my previous post I mentioned some purchases. There follows my full confession....
Above - the loot arrayed for your inspection.
The two kits - 1/35 Tamiya 20mm FLAK and 1/72 Waco glider were a tenner the pair. A good start!
The recent Fort Fisher game highlighted my dearth of ACW senior Yankee officers, so I was pleased to secure the quartet of Starlux’s finest - two mounted and two on foot.
A sextet of old Crescent Zulus was an unexpected - and frankly unlooked for find - but I couldn’t resist them.
Three old hollow cast Vickers gunners may be converted.  Into what I know not.
Some scruffy medievals and the pair of Charbens Russian mortars were cheap and useful.
The Edwardian medical teams are a mix of hollow and solid casts, nicely repainted.
The Barzso box contains only half a set (8 figures) of medieval figures but they were (by my standards) a sensible buy.
Italeri figures are getting pretty rare so I bought the set of Mamelukes with no plan in mind.
The box at the front contains some Marx Alamo figures. These are versatile and could end up anywhere. Even the Alamo...
To the right of that box is a set of Engineer Basevich Soviet women soldiers. Plenty of work for them in WW2 and later.
The Replicants figure is a bloke playing an electric guitar. He is apparently based on one of the firm’s founders.  It seemed like a good idea at the time.
The white plastic things are vacformed emplacements. You can never have too many.
Finally, the sandbagged horror with a roof was a gift from Brian. It could be just the thing for my Japs at Nomonhan. 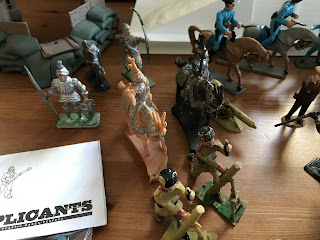 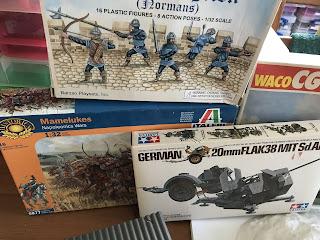 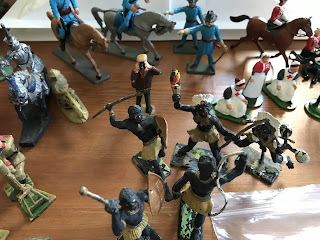 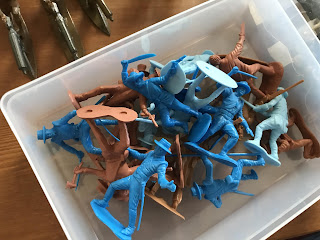 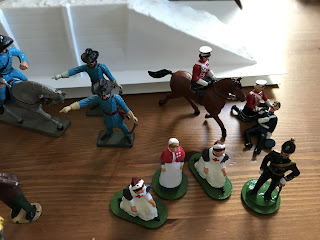 Some nice odds and ends!

Glad to see that rather nice nursing team went to a good home, I'm sure they'll get lots of use.

Archduke Piccolo
I have a few of the old Charbens ‘Russians’ but the mortar has until Saturday eluded me!

Tradgardmastare
Such is the joy of the PW show- literally anything could turn up!

Brian Carrick
I’ve always had a keen eye for a well turned out nurse....

The Zulus are great figures as are those Knights - fabulous haul!

All I can say is a sensible (?) snap with the Waco glider

PS: No I am not going the way of 54mm madness I only painted one!
https://exiledfog.blogspot.com/2019/05/54mm-russian-fun-airfix-ivan.html

Maudlin Jack Tar
Thanks (and good name). The Zulus in particular are great characters!

Geordie
Join us. Resistance is futile....