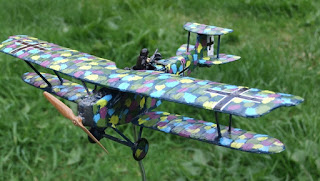 I wanted to try to replicate the 'lozenge' pattern camo which appeared on some late war German aircraft and having dismissed the idea of painting regular geometric shapes I gave the Hannover a base coat of dark blue and then topped it with 'blobs' of pale blue, olive green, yellow-green, yellow and purple.  It seems to have produced the right effect. 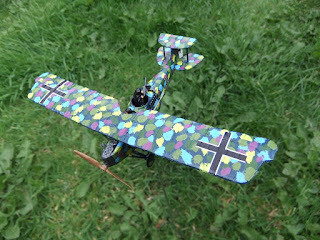 Decals came with the kit - to British eyes at least there are few more sinister emblems than big black crosses! 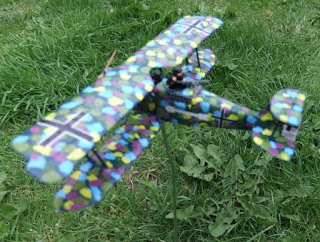 I would never have even thought of using this very effective way to quickly reproduce the lozenge camo pattern.

Steve the wargamer
Thanks. I remain stupidly pleased with it.

Bob Cordery
Like many aspects of our games, it sounds a bit dodgy but actually works very well.

That looks the part to me Tim.

Am I the only one who draws out the lozenges as equilateral hexagons with a pencil then paints each one a different colour by hand ?

Great paint job Tim! Your impressionistic approach to the hexes is very effective. Did the plane ask you to paint it like one of your French girls?
Peter

Pete
Thanks - and it was good to see you at Partizan today.

Don M
Thanks - it does seem to have worked rather well!

Nick Grant
Thanks - well worth the effort.

Phil
I remember wanting the kit decades ago, so it's nice to have it at last.

Peter Douglas
Don't mention the French girls - tell no one.

That looks a sweet ride Tim. Well done on the splotch effect.

Brilliant, I love it. My wife is convinced that someone called Cath Kidston does matching tablecloths and mugs!

Paul Foster
Ah, so you've seen my lozenge painting for what it is!

Ken H
If that were true, my wife would have a set of them!

Hello there, Mr. G! That one really caught my eye - marvellous job there. I'm getting my modelling mojo back so look forward to seeing what you have in store for us in 2017! All the best, Steve

Stephen Beat
The Hannover was one of 2016s high points. Hopefully it'll get another outing in 2017!