On Wednesday I ran Bob Cordery's Peninsular War matrix game.  I last saw (and indeed played in) this game at COW 1992 so my memories of it were, to say the least, somewhat hazy! 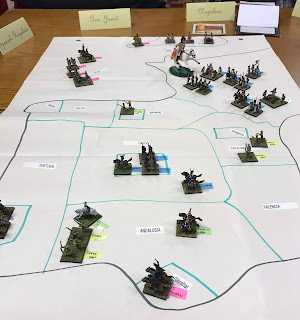 I managed to assemble players to fill all seven of the roles.  The cast list was as follows:
Napoleon - Martin R; Junot - Graham; Murat - Richard; Wellesley - John; Moore - Pete (assisted by Jerry); Spanish Royalists - Tim C; El Incognito (Spanish irregulars) - Diego.
I assembled the forces from my 15mm toys, with a 54mm figure for The Emperor.  The map was hand-drawn on a sheet of flip chart paper and place names added with a label maker.  The game covered mid 1808 to early 1809.
The action was driven by the players making matrix arguments - see the WD website for more on this. 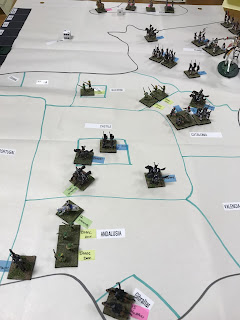 I'm sure that Pete, Richard and Martin will post their own reports in the fullness of time. What follows are some of my recollections.
El Incognito was soon active harassing the French and causing Junot some embarrassment.  Meanwhile the Royalists had a go at Madrid.  The Emperor sent reinforcements - though not as many as were requested - while Wellesley landed in a non-empty Lisbon. The situation in and around Madrid. 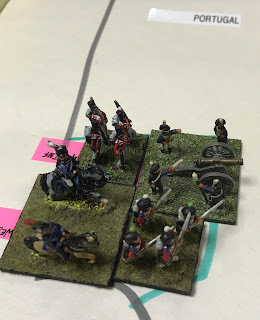 Wellesley and chums in Lisbon. 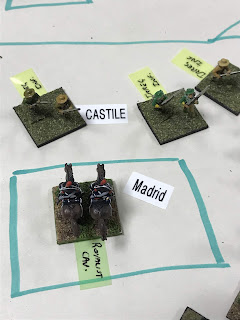 In a shock development the Spanish Royalists seized Madrid from under the nose of El Incognito. 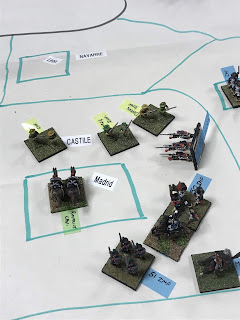 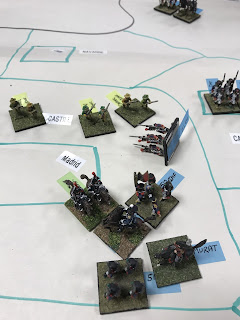 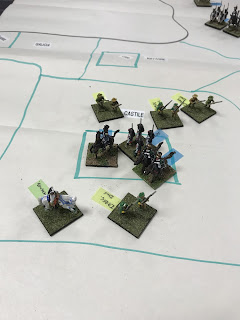 After a bloody struggle the French found themselves in possession of Madrid again. 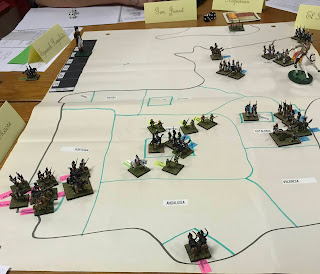 Wellesley meanwhile had failed twice to get to Madrid but had succeeded in not being placed under Moore's command. The players all seemed to enjoy the game! 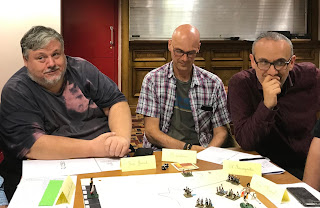 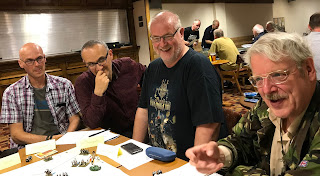 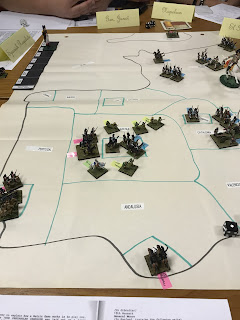 The end.  Everyone did well, though history may harshly judge the obscure Gen. Wellesley.  Moore meanwhile has hopes of being made a duke in a couple of years.
My thanks to all the players - and credit in particular to matrix game first-timers Pete and Diego.

And finally...
Back in 1992 I played El Incognito.  Having established and maintained an uneasy truce with the Spanish Royalists (John Davis) during the game, I stitched him up on the last turn and entered Madrid alone.  And you thought the French were the real enemy?
Posted by Tim Gow at 11:27

It's great to see this game being used, and that people are still enjoying it.

In truth, the original design was Chris Engle's; Tom and I modified a bit, but the design is still basically his.

Bob Cordery
It appeared under your name in the now rare and highly sought after COW 1992 Annual. Awfully well edited that one.....
As the photos show, it was huge fun!

I really enjoyed my first Matrix game- thanks for the oppertunity Tim. I look forward to giving another one a go in the future.

Pete
There are plenty more MGs in ‘stock’....

Geordie
It certainly was - a real 90s flashback!