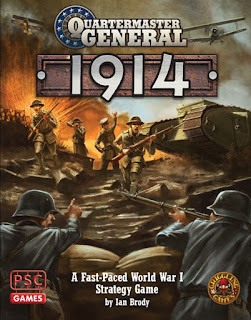 A couple of weeks ago we made our second attempt at this game.  First time out we played through a couple of turns just to get the hang of the mechanisms so this time we had hopes of making good progress with the war!
We managed to assemble a full set of five players who, as far as I recall, were as follows:
GB & USA - Tim C
Russia - Martin
France & Italy - John
Germany - Jerry
Austria & Ottoman Empire - your humble correspondent 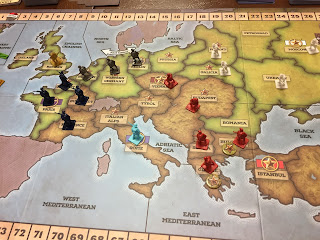 I opted for the declining empires as I figured this would leave me plenty of time for furiously leafing through the rules!  More ominously Martin volunteered to be the Tsar as he expected to be leaving early...
Things started well for Austria with a successful punitive campaign against the wicked Serbs.  I was then able to overrun the rest of the Balkans. 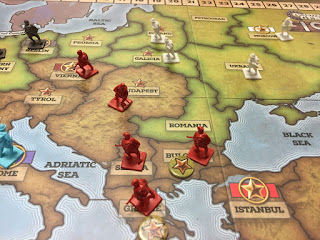 The Russians seemed more concerned with the Germans while the Italians took a while to get going.  So some acceptable history! 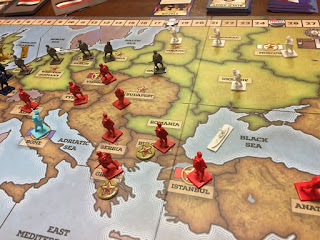 Things picked up further when the Turks came out to play - even that Russian fleet in the Black Sea didn't rain on my parade. 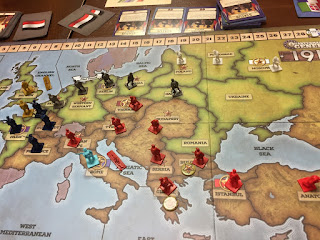 Speaking of fleets, it was soon possible to cross the Adriatic by stepping from hull to hull across a line of Austrian ironclads. The Italians were further incensed by the failure of the 93rd battle of the Isonzo which let me (well OK, Rommel) into North Italy. 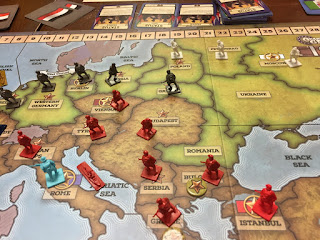 By now the Russians seemed to be in retreat in the west, if not in the east... 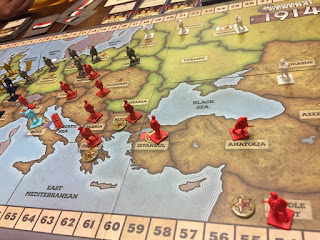 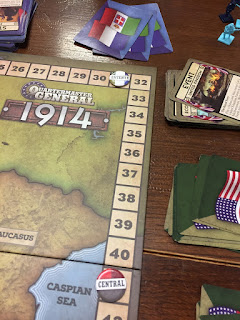 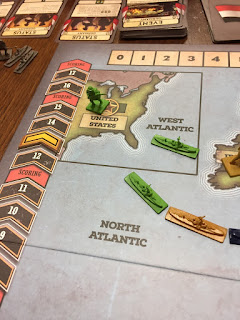 The US presence was starting to take effect - a rather longer chain of dreadnoughts than that in the Adriatic had formed in the Atlantic! 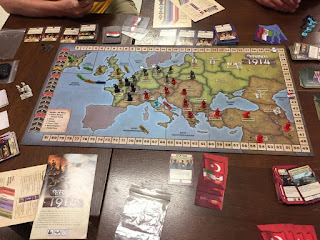 Did I mention that it's a visually pleasing game? 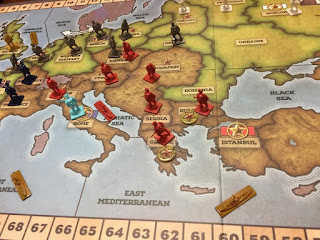 We wrapped things up at the end of 1917.  The Brits had made a success of Gallipoli and the Russians were in Armenia so the Turks were on the way out.  And I'd run out of cards!  But still the Central Powers clung to victory.
It's a very nice game - easy to pick up and with lots of nice little touches.  For such a high level and abstract game the grim realities of attrition battles are well represented.
Posted by Tim Gow at 18:12

Good stuff ! How long did it take to play?

Looks like a fun game- I did wonder about backing the kickstarter for it a bit back.

Pete
I backed the kickstarter but it didn't go entirely well - endless delays and poor information. Very good game though.

I'm waiting on a delayed kickstarter at the moment.

Will look out for a copy of this game though.

Yes, I think we played for around 2.5 hours (including setup, briefing etc).

We didn't play the last two turns as it was fairly obvious the Allies weren't going to catch the Central Powers VP total by then.