A tale of two Spitties - part 2 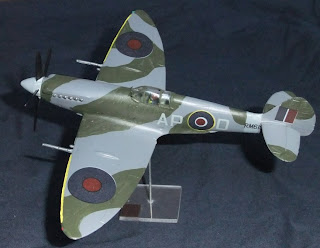 I managed to get the FROG/Novo Spitfire XIV finished at the weekend.  Unusually, it looks a lot better in the photos than in the 'flesh'.  As mentioned in my earlier post, this was cobbled together from parts of two kits.  As it neared completion, however, problems with the canopy meant that I had to raid a third kit (on Mk1 of unknown make) for that part.  There is still a gap visible at the front and a lot of filler aft. 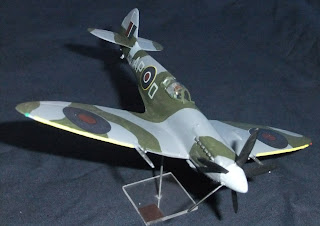 Markings were straight from the kit and depict an aircraft of 130 Squadron, RAF in 1944.  It was later transferred to 350 (Belgian) Squadron.  I managed to find a wartime photo on the IWM site - link. 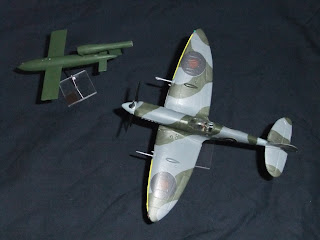 The V-1 went together very nicely - all four parts of it! 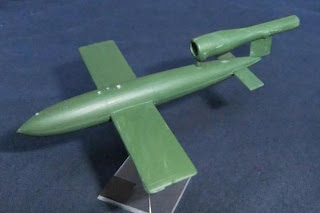 Maybe the title should have been a tail of three Spitfires Tim?

I do have a spare canopy floating around for a Spitfire if you so desire.

Nice looking product in the end.

Paul
Thanks for the offer - hold that thought! And keep looking for spare Spitfire elevators... Alternatively if you need any Spitfire wings, fuselages etc...

Al
Thanks Al - I just followed the picture on the box!

Good work with the kit-bashing. Those late-model Spitfires had very nice lines.

Tim, please send me an email at curtcampbell(at)mac(dot)com so we can set up coms for the Painting Challenge.

Curt C
The best of it is that despite buying two kits to make one Spitfire, the total cost was still only £3.00!