The new releases are now available to view on the Airfix website.  Kits which caught my eye include the following:

1/72 Vehicles - new tooling
Bomber re-supply set.  This is possibly the most exciting release, including as it does the much coveted bomb trolleys and tractor (like the ones which came with the Stirling bomber kit), a maintenance tower, various bombs, a Bedford MWC/MWD truck and a Standard 'Tilly'.  The provisional box art also shows a fuel trailer.  Worth £16.99 of anyone's money?  Probably. 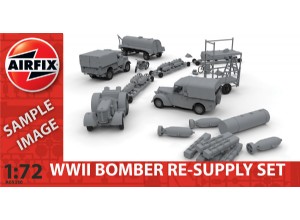 In larger scales we welcome back Monty's Humber, Rommel's halftrack and the Desert Outpost and Strongpoint buildings - all in 1/32.  New 1/48 kits include a Warrior IFV and British Army Quad bikes.

Some old chums reappear in the 1/72 and 1/32 figure ranges, including WW2 Aussies, Russians, Gurkhas and NATO ground crew in the smaller scale and SAS and WW2 Japanese in the latter.
Posted by Tim Gow at 12:29

1/72 Russians are back? Yeah! One of my first sets. Whatever nice things one can say about all the newer ones, I may need one out of pure nostalgia.

Good to see that Airfix are re-releasing there ANZAC's, even if I have enough ANZAC's!
FF

Ross Mac
Oddly enough I never had the Russians 'first time around'. Not a bad set though.

FriendlyFire
A nice set as I recall.

I got Russians and Confederates one year for Christmas. After a quick consultation with older brother, the Confederates became Hungarian rebels for the next few days.

Ross Mac
Inspired use of the figures! That explains a lot......

My original 'strongpoint' was extensively fought over using the old Paragon 54mm skirmish rules back in the 1970s. I wonder where it went?

Martin Rapier
I never had the 1/32 Strongpoint but if I ever see it for significantly less that Airfix's suggested £20 I may well be tempted.

I must pick up a Val before they disappear

Geordie
As mentioned already, the Aussies are a good set. I've never built the Val, so it'll be interesting to see how you get on.

(including the re-release of 173 track colour)

Get your priorities right!

Wg Cdr Luddite
I knew some sad individual,would be excited by that. I even knew who it would be.....

Erhntly
Yes - some good stuff there.