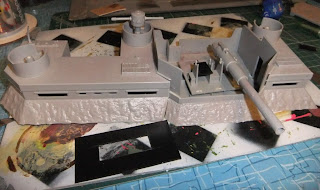 I need some fortified guns for a forthcoming game, so I decided that it was finally time to refurbish this sorry looking Airfix Coastal Defence fort.  When acquired a few years ago it was smothered in glue and missing some important parts.  On the plus side I only paid £1 for it!  The missing bits included one of the gun barrels, the gun shield and predictably, both AA guns.
My first step was to fashion a new gun shield from plastic card.  As the gun mount had been rather firmly glued into place I at least didn't have to allow clearances for it to traverse.  A second gun barrel was built from some plastic tube. 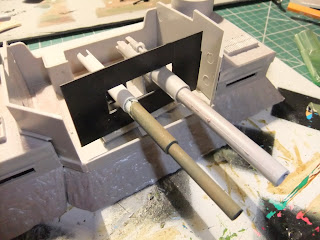 The gun mount with it's new shield and gun barrel (left).  The latter is a different calibre from the original but we'll put that down to wartime extingency shall we? 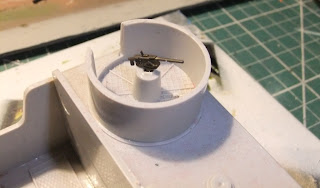 The missing AA guns were more of a challenge, but I eventually decided on these Roco .30cal US MGs.  Amazing what a rummage in the spares box can yield. 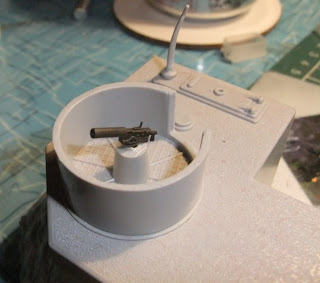 Hopefully I'll get it painted later this week.  More pics to follow.
Posted by Tim Gow at 12:14

Are you going to give it a bare concrete finish or camouflage?

Bob Cordery
Definitely camo. I painted one a few years ago and it looks OK so why spoil a winning formula? I do have some 'bare' concrete bunkers coming soon though....

1 euro! You sure are a lucky chap!

Any way, good job, makes me wish I could find one for that price, the reatil price is too much for something I can (attempt to) make.

Too Bad... i just re-did mine and didn`t use the guns or the shield.but you did a great improv!

FriendlyFire
Lucky indeed - I now have three of these! Before I was in this happy position I did throw together a 'home made' version. Shall I drag it in front of the camera?

Tsold9000
Given how seldom I expect to use it I was reluctant to spend too much time on it. It does look OK though.

Great idea. It's a venerable old kit. I couldn't fine the guns at the time I was doing D-Day so I put a spare 88 in it instead. I look forward to seeing what you do with this.

Service Ration Distribution
Good idea. An '88 (and who doesn't have spares) never eben crossed my mind - but then I need mine to have proper big and scary guns for a handpicked team of desperadoes to try and destroy...