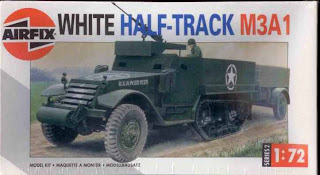 A return now to my series of posts charting the development of that Airfix AFV kit range.  And you all thought I'd forgotten.  For some reason I only seem to add to this series during the festive season.  I have also given the series it's own label, so to see the earlier posts, just scroll down to the 'History of Airfix' label.
Anyway, enough preamble - lets have a look at the toys.  1966 saw the release of two important kits - the US Halftrack and the Matador & 5.5in Gun.
The Halftrack box above dates from the late 1980s and the kit itself builds into a fair representation, although there are apparently a number of detail inconsistencies. But how we all love it. 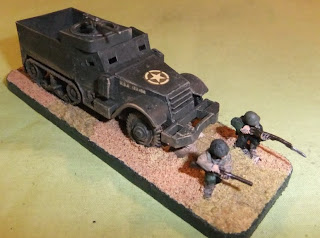 Above - a bog standard halftrack accompanied by a pair of FAA metal US infantry.  This particular stand is currently between engagements but will no doubt be allocated to an armoured division in the fullness of time.  Below is a very nicely done (not by me!) conversion into the earlier M3 Scout Car. 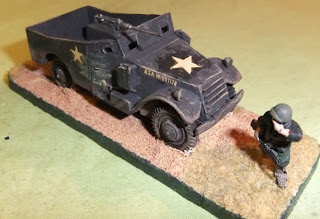 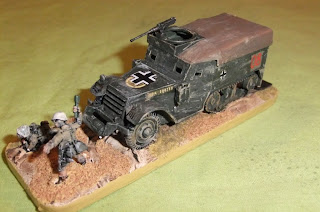 Captured halftracks are also present in my boxes, including the one above currently on the strength of 10 Panzer Division (in Tunisia), and JR's 'Hollywood'-style conversion below which serves as a recce company in 14 PD. 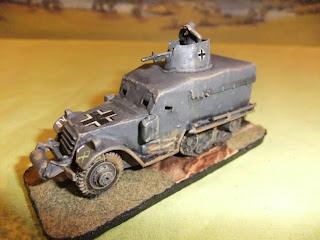 The Matador and 5.5in Gun is a particularly useful kit - I have loads of them, although the Matador & Gun rarely serve together. 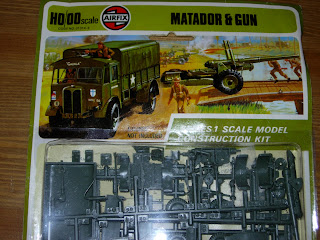 Above - the 1970s period 'blister pack' in which most of my early Series 1 kits arrived.

This pair were built straight from the box by Steve T - I've not yet interfered with them in any way. 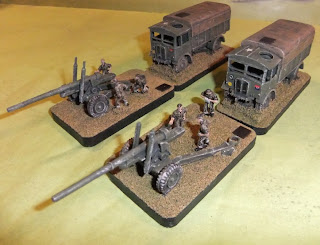 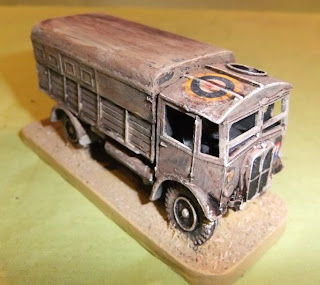 Above - this high mileage Matador is currently employed dragging a large AA gun around North Africa. 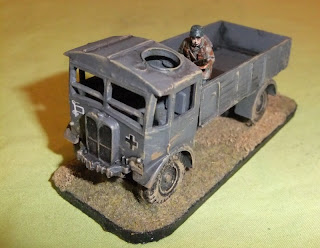 My Germans have commandeered a few Matadors over the years.  The one above belongs to 2 FJR Div. 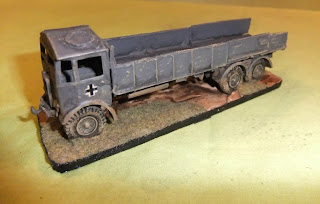 JR's ever-popular stretched Matador always attracts a lot of attention when it appears in games.  The kit was probably quite a new release when this conversion was carried out!  Below is the same lorry next to a standard Matador.  Both are currently in the employ of III Armeekorps. 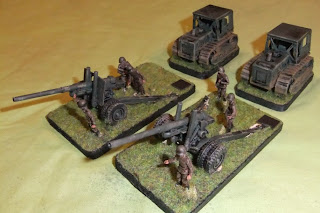 The 5.5 has also travelled a bit - my Russians have several lightly converted into 122mm guns.  seven actually.  You want to see them all?  Well, since it's nearly Christmas I'll see what I can do.... 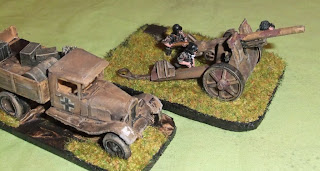 Not to be left out, 8 SS Kavalerie Division has this much hacked about 5.5 in service - the shield is from an '88'.

It's not so much about forgetting, rather the inevitable results of the years rolling by...

Anyhow, before I forget, merry merry and happy holidays.

Arthur
You could be right - and happy hols to you!

I'm impressed. These are really imaginative. Mine merely put 5.5's for 11 Armd Div. Merry Christmas to you.

Service Ration Distribution
My approach to kits tends to be not "what is it meant to be?", and more "what could it look vaguely like?" Merry Christmas.

As classic as these kits may be, I never had the chance to have, or indeed spot, any. Airfix distribution patterns for Italy are one of the greatest misteries ever.

The 5.5s in russian service really look the part!

Fire at Will said...

I converted one into a Pak43 based on an Airfix magazine article.

Giano
I can barely imagine life without Airfix - it's had a considerable effect on my life! If its any consolation, availability of Esci kits was always a bit hit and miss here.
Merry Christmas!

Fire at Will
I have one of those too! I'll try to find it for a photo.
Best wishes.

Best Christmas morning reading ever! I have lots of plans now for spare 5.5's!

Hmm that happens to my kits, they end up looking vaguely like something, but then that's when I'm doing my best to put them together as intended!

Hi Tim,
I saw the "Hollywood Half-track" on an episode of "Combat" the other night. It was a semi-regular for a couple of seasons. Have a great Christmas,
-Steve

Steven Page
That just proves how realistic the model is!

I have a couple of 5.5s that will probably end up converted into 152s in the Red Army. I just need extra wheels to place alongside the existing ones. I have the replacement 'shark gill' gun barrels ready to install.

Archduke Piccolo
There is something deeply satisfying about bodging together a 122 from a 5.5, even though kits of the soviet guns are now available.