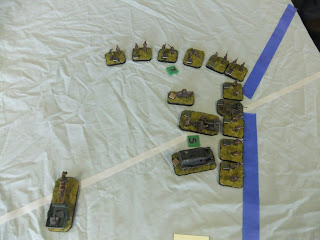 More pics from the game now.  Above is a French infantry division in a defensive position. 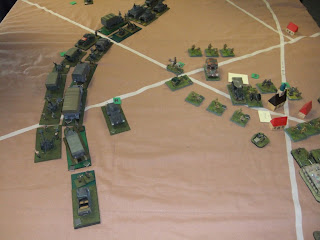 Sadly the Germans (8PD in this case) generally drove around such defences.. 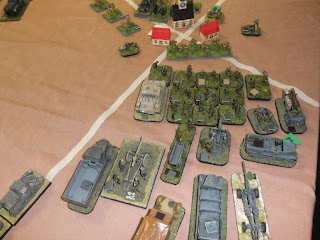 ...leaving them to be assaulted by the follow-up infantry divisions.
Here we see 72 ID getting stuck in with corps-level artillery support. 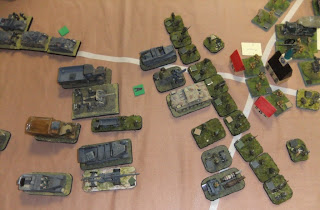 72ID starting to sweep round the flanks.

Elements of 14PD on the march.  Some divisions became quite
fragmented and commanders had to spend time getting them back in order. 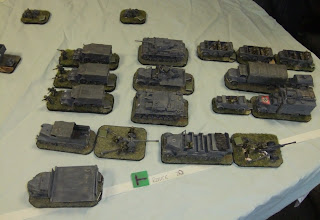 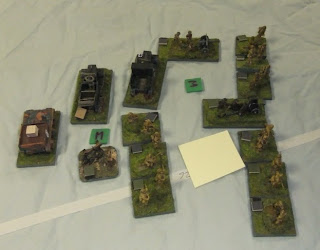 Another French division nervously prepares for a fight. 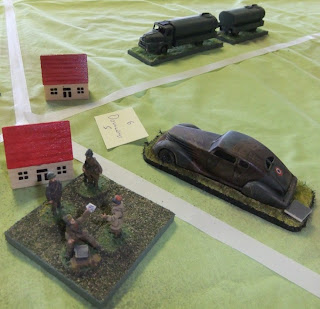 Meanwhile, at the French Army Group HQ, few traces of the developing crisis can be seen.
Note the General's fancy motor car.
Posted by Tim Gow at 09:43

I never get sick of looking at your collection Tim

Paul Foster
Some of these divisions are built entirely from bodges!

Al
The thought of my toys providing worldwide entertainment makes it all worthwhile!

That fancy motor car - that's a Cord, isn't it? A pretty mean machine.

That is a fine collection, Tim. I wouldn't call some of the ... adaptations 'bodges' - more like extempores, conversions and modifications. There is no doubt the French army acquired one or two Matador trucks and put them to use...

Lon is right about that, and we all know the Germans will be picking up allot of equipment cheap very soon...)

Archduke Piccolo
I should point out that I don't consider 'bodge' to be in any way an insult! I'm not sure about the car - I think it's a made-up thing, though the front does have the look of a Cord. I do have a couple of 'Hot Wheels' Cords awaiting paint....

Don M
Quite so - I expect there will be a closing down sale on a nearby beach...

Any of those bombers for sale? I need to move the gold I found in Valenciennes to The Azores.

Dancing Cake Tin
No - but the General did leave his car...