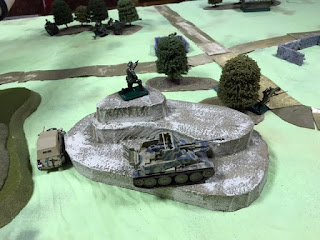 Following on from my solo playtesting (see here and here), I decided to unleash the game on actual players.  Several are still speaking to me so I think that makes it a success.  The scenario was basically the same, so the Brits had two troops of Shermans, a Motor section, a mortar section and a leg infantry platoon.  The beastly Boche had three half-sections of infantry, as well as a mortar, a PAK40 and a Marder.
Above - The German defences with the CO atop the hill.  All troops were assumed to be dug in at the start. 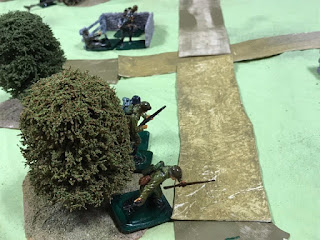 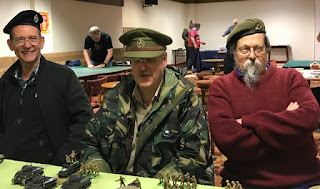 While a suitably hatted Martin and Graham played the Germans, the Brits were (from L to R) Tim C, John & Jerry.  It's going to be a long war. 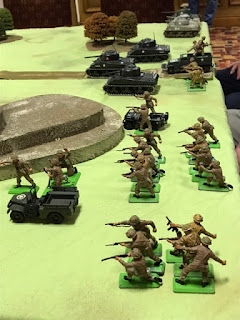 The Brits deploy.  Infantry on the left, tanks on the right. 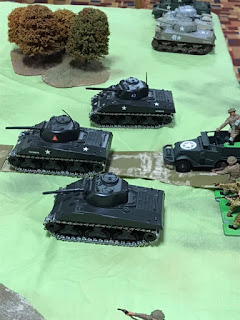 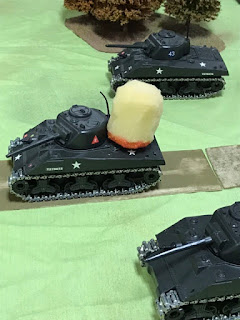 Soon one of the 'Tommy Cookers' was ablaze... 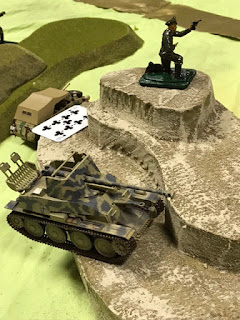 ...while Martin polished his monocle and congratulated the Marder crew. 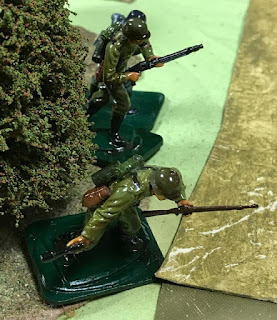 The Germans were itching to hose down the Brit infantry but the latter skulked in cover. 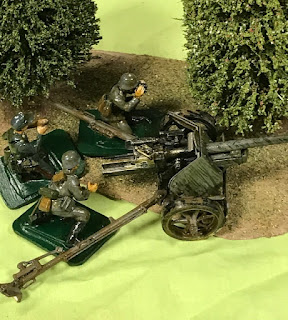 The PAK 40 was also in action and winged a couple of Shermans. 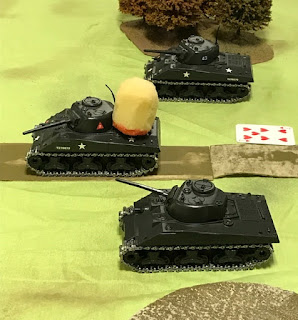 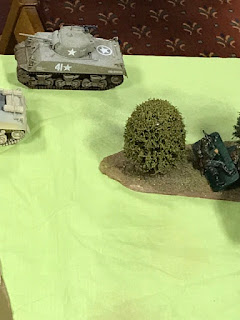 The second troop rather unsportingly hugged the right flank and sneaked past the PAk - dodging the odd Panzerfaust as they went. 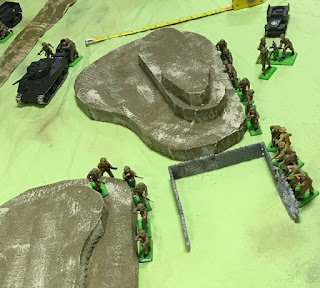 Jerry was taking a cautious approach with the infantry - until increasingly irate messages from the CO got through. 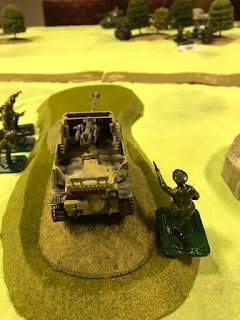 A Marder gunner's-eye view of the flanking Shermans.  At least I think that's what Martin called them. 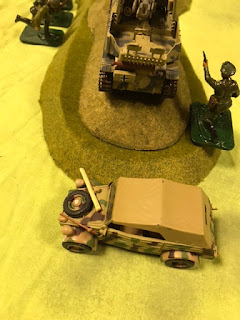 The most effective mortar round of the game  - a direct hit on Martin's VW.  Sadly it was fired by the German mortar.... 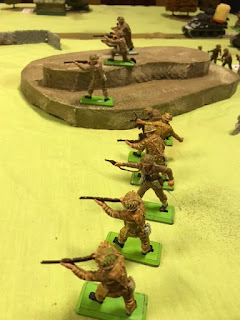 The Brit infantry finally advancing.  At the cost of most of a section the first German position was soon cleared. 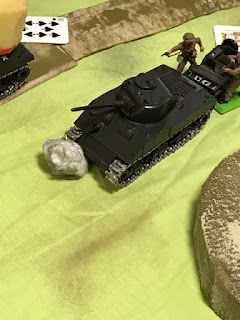 A Sherman is immobilised while the CO fumes in his Jeep. 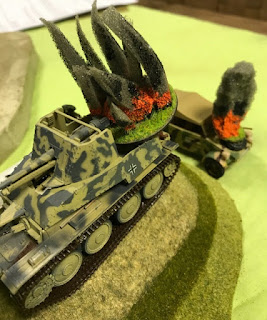 Alas it was soon over for the Marder which perished in a hail of 75mm AT rounds. At this point we drew a veil over proceedings.  The Brits had lost (KO or immobilised) half of their tanks and a quarter of their infantry while the Germans had lost both their long-range AT weapons.  We agreed that the Brits would consolidate while the Germans trudged back to the next position.

So did the game work?  On balance, yes.  The AT gunnery system went down well and the main discussion was over the card driven activation - though having considered various alternatives I think I'll be sticking with it.
As luck would have it, I was able to play the game through again with Bertrand the following week.  I am convinced that one of us took photos but none have as yet been located.
Posted by Tim Gow at 18:34

Will you be publishing the rules? And do they involve firing matchsticks?

It was a good game and I think the tried and tested card system works fine. If there was any slowness it was due to players faffing around with a new game system. I suspect we should have activated the Germans by groups of units rather than each individual element though.

Brian Carrick
Maybe but not for a while. And yes, of course!

Martin Rapier
Indeed - I have come round to the idea of group activation, with separate cards for detached units (as per Op14).

Looking at the photo of the British commanders makes me wonder how we managed to win the war.