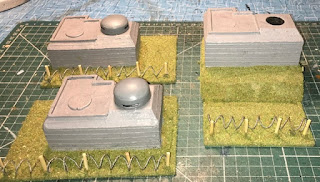 I picked up this trio of 15mm resin bunkers at a bring & buy last year. I didn’t particularly need them but their cheapness won me over. They then languished on a shelf until their luck ran out last weekend when I decided to attend to them.
As I intend to use them as small bunkers with 54mm figures (that howl you heard was the ‘proper’ wargamers expressing their outrage...) I removed the French tank (R-35) turrets which all three sported and added a couple of cupolas I had kicking about. Next I re-painted and stuck them onto hardboard bases - one raised on an ‘embankment’ carved from 1-inch insulation board. Finally I drilled holes and glued in half-matchsticks as posts for the barbed wire. 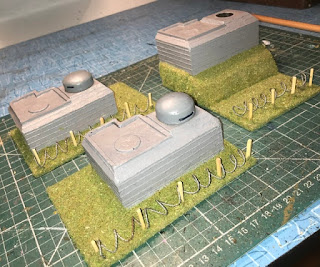 When the paint dries I’ll take a couple of photos with figures. So stand by for further howling. 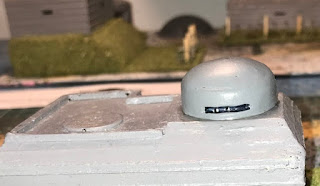 Nicely done. What are you planning to use for the one bunker that lacks either a cupola or tank turret? The three will make excellent entries either for Normandy, the Siegfried Line or positions on the Oder. In a pinch they can also be used to represent works near the Maginot Line which used cupolas for its bunkers.

Will you add a pair of eyes to one of the vision slits?

CelticCurmudgeon
They’re big bunkers in 15mm but will be used as small MG bunkers in 54mm. It’s wrong but somehow right....

The eyes are the best thing I have ever seen!

John Y
I guess we all just need to get out more!