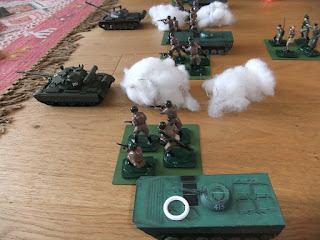 I called in to see Alan in Tradgardland last week.  As arranged I had taken the kit to stage a modest Little Cold Wars game.  Soon the toys were set out on the floor and battle commenced.  Alan was keen to 'experience' the game's mechanisms and had requested a role which involved very little decision making so he had command of a dug in US Mechanised Infantry Company with a supporting platoon of M-60A1 tanks.  I led the attacking Warpact Motor Rifle Battalion in their BMPs, complete with mortar battery and an attached company of T-55.  Above can be seen the dismounted assault going in with the tanks laying down smoke. 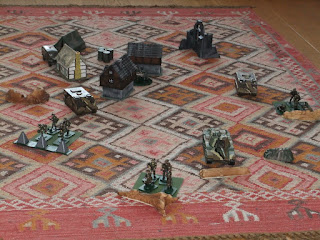 The wicked capitalists prepare to face their destiny. The M-60 platoon took an early hit and pulled back after firing it's smoke dischargers.  Basically Alan had only to choose between firing a few rounds and clearing off to fighting to the bitter end.  He opted for the latter. 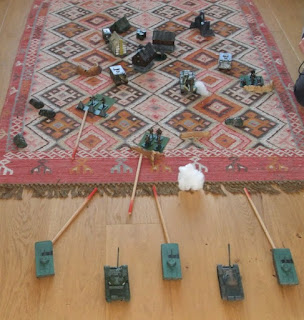 The assault was conducted pretty much as per the book.  While the T-55s fired on the move the BMPs halted about 500 metres short of the US positions and loosed off their Saggers.  As the Yanks returned fire with Dragons the battlefield was soon a confused mass of ATGM control wires.

On hearing that the carefully crafted gunnery mechanisms involved doing silly things, Alan's eldest daughter Zoe was soon looking after all our gunnery related issues.  Here she demonstrates the AT gunnery system... 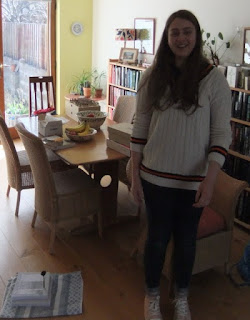 ...which is clearly quite enjoyable... 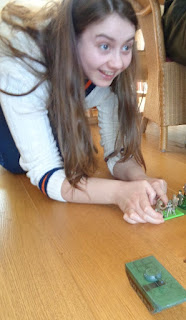 ...but not as much fun as firing the mortar!  (photo by Alan) 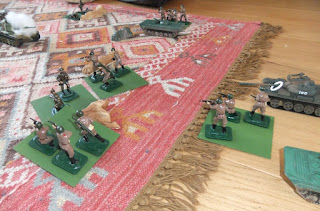 Meanwhile the now dismounted Comrades got stuck in to the first US platoon.  The initial close assault went rather embarassingly wrong when after failing to score a single hit, one pf the three attacking stands ran away.  Commissar to Company No.2 please.... 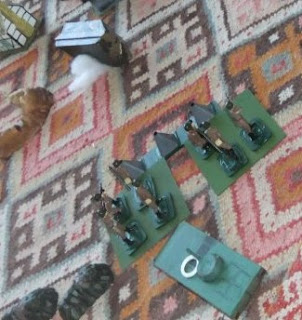 Things soon picked up though, and the Warpact steamroller trundled onwards.  The US right flank platoon soon disintegrated.  In the background their M-113 still smoulders.. 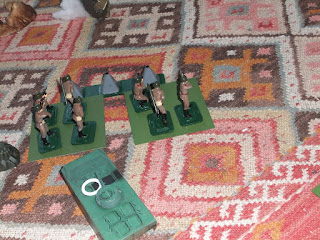 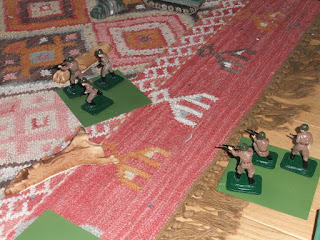 As the Comrades mopped up (and presumably looted) the US positions the remaining US platoon hopped aboard it's M-113 and fled to safety. 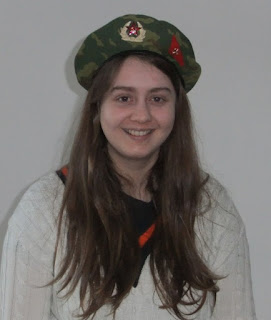 Zoe in her new role as Chief Gunnery Commissar to the Forbodian Peoples' Army.
Posted by Tim Gow at 09:23

Looks like you had a good time....always good to recruit the next generation of gamers!

I am always on the lookout for you articles on this project. Great to look at, and keeps my spirits up.

Great stuff. Will have to aquire suitable props for my own games.

Men in hats is suddenly much more photogenic :)

Don M
Zoe's enthusiasm was a joy to behold.

Archduke Piccolo
The manuscript for LCW is damn nearly done. More news as it breaks.

Thanks Tim for a most enjoyable day.
The second Centurian tank arrived today for the Swiss and more on the way...

Tradgardmastare
Always a pleasure. Swiss eh? I expect you'll be in the market for a nice low-mileage AMX-13 then......

Well done Comrade Zoe! Of such silly mechanisms are great games made.

So nice when the young can be enticed into questionable behaviour. Is that really a dart being dropped over a hardwood floor? Nice....

Michael Peterson
And she volunteered! No conscription here...

Ross Mac
Not my hardwood floor though....