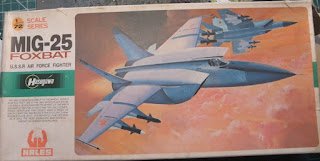 Who doesn't love the Foxbat?  Most of us will recall hearing it described as a new Soviet 'wonder weapon' in the 1970s, when it's supposed Mach 3.2 speed seemed to render NATO's less zippy Phantoms and Mirages relics of the past.  Of course, the truth  - vacuum tubes and all - soon emerged, assisted by the defection of Lt. Viktor Belenko who in 1976 obligingly landed his Foxbat in Japan.  He was even thoughtful enough to bring along the pilot's manual for the type.  Though Belenko's MiG was subsequently returned to the Sovs it had been thoroughly dismantled by the US Air Force.  Presumably to make packing it easier....

Unlike the sensible US personnel who when faced with a  big pile of Foxbat bits simply sent them back to Russia, I plan on assembling mine.  It's an old Hasegawa kit which - tatty box aside - looks to be in good fettle.

The initial build went pretty smoothly, though I'm continually surprised by how huge it is.  Some of the panel gaps are a bit hairy so I can't see my version cracking Mach 3 anytime soon.

See what I mean about those panel gaps?
Posted by Tim Gow at 18:00

Well...keep at it young Gow.

It looks big indeed for a 1/72 scale model! But it looks good so far!
Were you looking for spareparts in that last picture Tim? :-D

Excellent project Tim. It will be bloody massive in 1/72!

There's a funny story about the Foxbat that was returned to the Soviets after the defection of Lt. Viktor Belenko. 'Officially' it was not supposed to have been examined, but - apparently - Soviet suspicions that it had been thoughtfully 'gone over' by Western experts was inadvertently confirmed when the MIG-25 came back very much cleaner than it had been when it left! ;)

Don M
And you didn't have to fund production of the XB-70, which is why Ivan built Foxbats!

Conrad Kinch
One endeavours to give satisfaction sir.

Peter
The depleted MiG in the last picture is nothing to do with me! Honest.

Paul Foster
Massive it is. I'm saving up for the silver paint....

Stephen Beat
The Sovs are - sorry, I mean 'were'- a suspicious lot.