This evening we played through the second part of the game. Over both nights we took about two and a half hours to run through all 9 turns. Not bad considering the mix of experience among the players, including one who’d never previously endured a Matrix Game.
Eventually the Germans were thrown back to their start lines and much blood was spilled. I have summarised the narrative of the game below.
The clear winners were agreed to be Stalin and Chuikov, who each achieved their three objectives. Chuikov’ s survival was something of a surprise as he personally led at least half a dozen assaults!
My thanks to all six players for making this such an enjoyable experience. 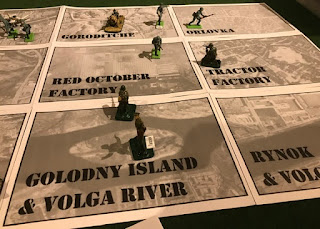 A couple of random photos taken towards the end of the game. 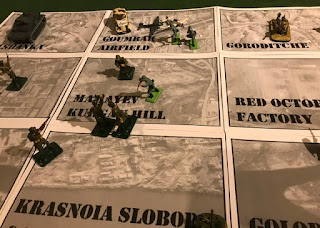 Far out! Scarcely concealed behind that terse narrative is what must have been a tense, dramatic and involving action. I'm curious as to what Genl Chuikov did (or didn't) do to get busted down to Colonel (and presumably lose command of 62 Army).

It was a great game Tim, well done. Such a shame those signed photos of the Fuhrer didn't make it through my air. I am glad the Sixth Army fulfilled its historic destiny for the greater good of the German people.

really great game and a great break from being stuck at home ,thanks Tim .

Never mind the shame about signed Hitler photos not turning up. The real shame was the failure of my (von Paulus) 2 assassination attempts! There was even a glimpse of the brief case under the table.

Great evening and thanks all for the intro to matrix gaming - ceryainly beats watching the telly. Also, the 54mm figures are great for webcam games.

Looks like a very small number of toys for a very big game, how does that work then?

Archduke Piccolo
Chuikov was busted as part of an apparently random reorganisation of commands initiated by Comrade Stalin.

Martin Rapier
Never mind - I’ll treasure the photo of you which did get through.

Itchy’s wargames
You had a good war, Comrade!

Simon
I thought you denied any knowledge of an assassination attempt. Entertainingly, there actually was a briefcase under my table.....

Brian Carrick
The toys were purely representational. In most respects cardboard counters would have been easier, but where’s the fun in that?

Yes you zoomed the camera on the briefcase - perhaps that upset the the timing mechanism?

Absolutely no contest between cardboard counters and shiny 1/32 toy soldiers!


Looks like good fun was had by all who played.

As Tim said, each toy was representational. I guess each one was a division or so, but in game terms it was a discreet element which could be ordered around.

Simon
I’m giving the briefcase a wide berth but it hasn’t detonated yet!

Pete
A very good game. I might run it again if I can amass a different group of 6 players......