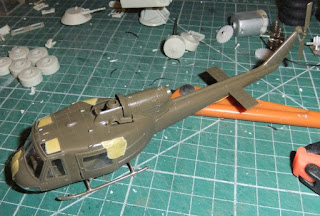 Two of these wingless wonders were kindly sent to me a while back by Paul at Plastic Warriors. 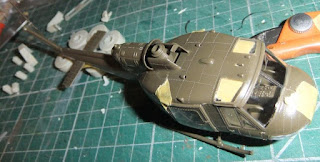 I decided at an early stage that I'd assemble the thing then paint over the glazing.  I think these are Revell kits.  They went together quite well - any resulting dodginess is down to me.

One thing I noticed with the first build was that it didn't 'sit'properly.  This was partly cured by adding some weight underneath the cabin.  For the second build I was better prepared and added the weight internally.  This took the form of a scrap 15mm horse, though I accept that I may have misunderstood the concept of 'Air Cavalry'.... 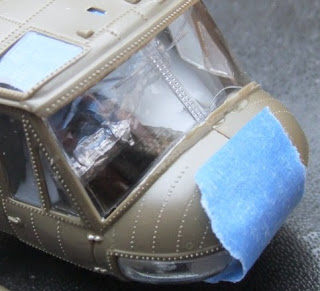 Now i understand whatfor the Wokka thing was! My first thought was that you were asking for Wodka! :-D
Great build so far! Great Air Cav!

Great work. Nice to see you are respecting military liniage with your choice of weight.

Peter
Well if you're buying....

Pete
Traditions have to be respected.

Very nice work, though I must protest.

Duc de Gobin
I never dreamt this would be so controversial!

cool, helis are always a tough build for me

Al
They can certainly be fiddly but these kits weren't bad.