Leaves on the line

Having undertaken to run a game last Wednesday, I cobbled together a small Funny Little Wars outing to the ACW.  John was the man in the (my actually) grey kepi while Martin sported his Zouave-esque fez. 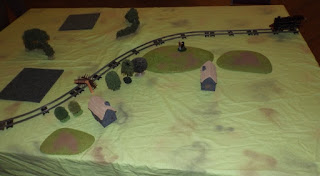 The plan was for a train - laden with 3 units of US infantry - to trundle on from the north east (to right) corner.  On rounding the first bend the crew would spot the obstacle which the cheeky Rebs had placed across the line and halt.  The Rebs would then attack, with the objective of capturing the train.  Neither side was permitted to destroy the train.

As always the well-know Forbodian photographer Mat Bradic was on the spot to record the action. 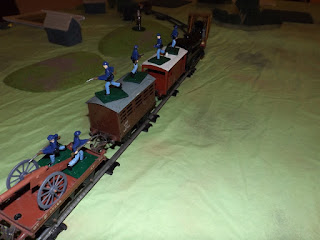 As well as it's loco, the train comprised two packed wagons and a flat car with a gun.  Meanwhile at the front end... 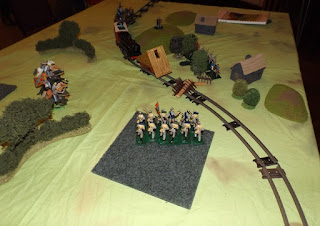 Was our old friend the Thunderbox! 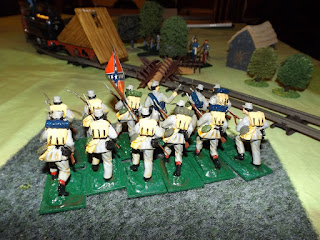 As the train slows Confederate forces rush forwards!  More on these figures in this earlier post. 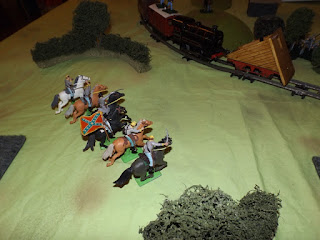 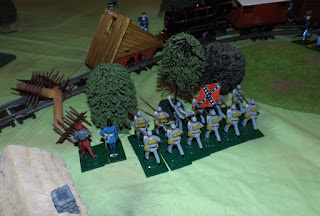 Supervised by Gen. Pickett and Col. Robertson the grey-clad horde potted away at the train guards. 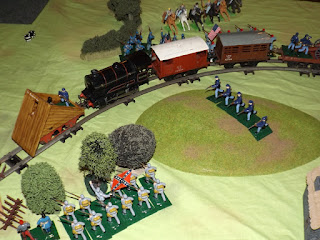 A messy brawl was developing as the last of the Yankee infantry disembarked from the wagons. 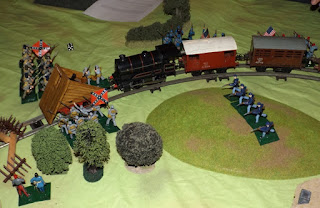 Ignoring the hail of enemy fire the Rebs rushed the Thunderbox. 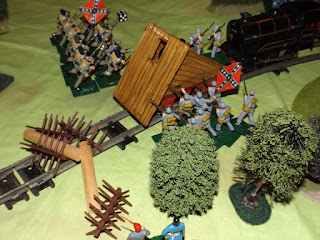 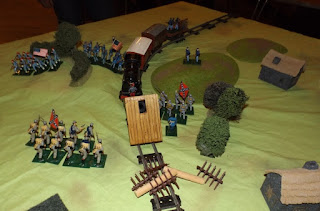 By now the cavalry had perished in a hail of musketry. 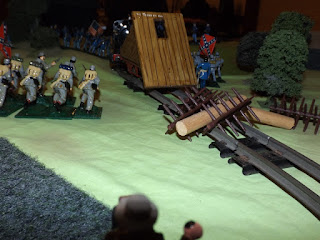 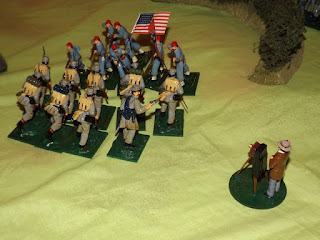 As the Rebs on the left charged the Zouaves their officer remembers to look at the camera! 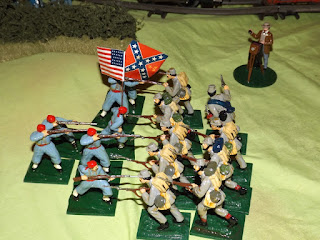 This was a bloody encounter but the Rebs prevailed.  Despite their flag being upside down! 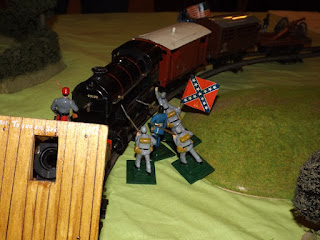 Led by none  other then Gen. Pickett (he's the man for a charge, you know), the Rebs took the loco and saw off a Yankee challenge.  At this point the Yankee commander conceded the game.
So and enjoyable little game with only around 70 figures on the table and a playing time of under two hours. 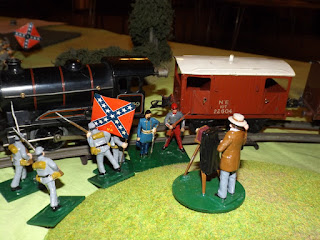 Very nice Tim- I didn't realise you had such figures in your collection. I have fond memories of my long gone Britains ACW figures.

I've had the infantry for a couple of years. The Deetail cavalry arrived quite recently, together with a lot of others!

Only about 70 figures on the table! Sheesh! ;) (I think I can field 10 Molatarians so far!) Hahahahahaha!

Stephen Beat
Just another 60 to paint - what are you waiting for?