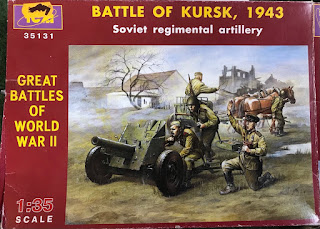 It feels like - and probably is - months since I last built a kit, so today I dug out this tatty box and set about the contents.  I knew it would probably be a bit fiddly as the gun uses the same carriage as the 45mm AT gun (itself a development of the German 37mm).  Gun aside, the appeal of the kit is that it also includes the limber, a pair of horses and five rather nice crew figures.

Two hours later and the build is largely complete.  I have, of course, dispensed with several of the more delicate parts including many of the bits of harness. But so far so good. 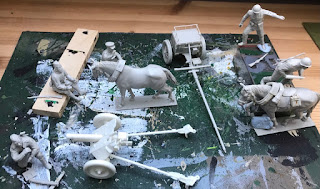 Great stuff. Having the limber is a real bonus, and only two horses to paint!

Good to see you back to the big scale figures!

Looks liken a nice piece of kit! Even unpainted they look good.

You were clearly in need of an emergency plastic transfusion.

Nice kit, I think I will pick it up myself

Archduke Piccolo
I must keep,up,the momentum and paint the sods now!

Brian Carrick
That about sums it up!

Bluewillow
I can safely recommend it sir!

I'm sure they will be better than mine. I hate painting horses.