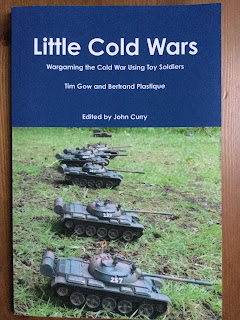 I am delighted to report that Little Cold Wars is now on sale!  During the last few weeks I have exchanged many emails with editor and publisher John Curry and I was able to approve the final proof this morning.  Currently the book is only available through the History of Wargaming website (link) but John tells me that it will soon be on Amazon in both print and Kindle versions.
The photo above shows my own personal copy. 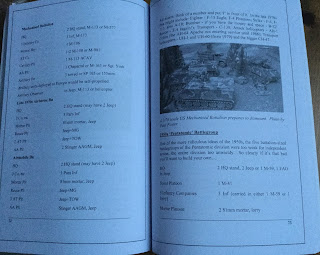 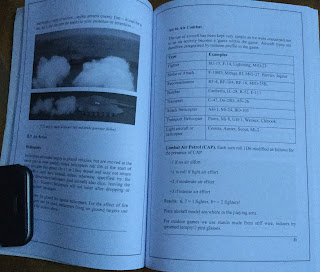 More at:  http://www.wargaming.co/recreation/details/littlecoldwars.htm
Posted by Tim Gow at 21:36

For some reason the images in this posting did not display in my browser (Chrome). This does not happen with your earlier postings and I've no idea what is going wrong.

Maybe you can post a link to the kindle version once it is up on Amazon.co.uk?

Mine too. It's a plot to increase sales!

Mike Hall
Just re-posted the photos - the first version was done on iPad which Blogspot doesn't seem to like!

Paul Foster
So how many copies have you ordered?

Congrats Tim- I'll be ordering my own copy.

Need to find one of the firing mortars too...

Pete
So even playing it hasn't put you off? Good man!

OK Gow you fiend. I have parted with money. Don't spend it all on gin.

Well done Tim. What scale do the rules cater for (6mm? 20mm?) and is it more skirmish or tactical in scope. We're looking at Modern Spearhead in 6mm but willing to give your rules a go...

Stephen Briddon
Gin? No sir, I'm saving up for my own Cayman Island...

Phil Broeders
he design and development was mostly done with 1/32 figures and 1/50ish scale vehicles. Trust me, it does work! It's also been tried successfully with 15mm and 20mm toys. That said I see no reason why you couldn't use LCW with 6mm toys. They're pitched at battalion/brigade level with a vehicle model or infantry stand representing generally a platoon.

Peter Douglas
And remember - as an early playtester you share the blame!

There had better be a range of miniatures and supplements if you are planning on buying an island.

Congratulations Tim....So when is the book tour and signings? lol

Looks excellent. Will wait for the print version I think, before buying - and very well done. Can see that I will like the style of writing just from the samples you have posted :)

There's a copy winging its way to me as I write this.

Better dust off the 1.72 chieftains.

Rock on! I think I will wait for it on Amazon.com and get the print version. I have blown my budget this month buying a bunch of M-103 heavy tanks!. Look forward to getting it.

Chris
You can buy it in print now! But I've just realised I didn't include stats for the M-103! Can you ever forgive me? I'll post the stats on the LCW Yahoo Group after I make them up. Er I mean after I meticulously research them....

Should we also expect the Nato Brigade Commander rules soon? :)

You know where to delive rmy free charity copy.....

Hi, Tim,
Being cheap and impatient, I purchased the kindle version of LCW this weekend in anticipation of playing on the lawn with some of my children this Summer.

Could you please clarify a few items (my confusion might result from the e-version formatting)?

1. B4 Direct Fire: There is a table with the headings: Range, Foot in Open, etc. with a number. I assume that the number is a die roll, and one must roll that number or higher for a hit? Honestly, I could find no explanation.

2. B4 Direct Fire: What is the difference between dropping a dart (Tank, AT gun) versus a ball point pen (infantry AT launchers)? The dart will stick in the target, presumably the pen will not (I haven't tested). Or, is the smudge of ink from the pen good enough? In which case, the difference in weight (when combined with shaky arms and wind) will make the dart more likely to be on target, but the pen not?

3. B3 Visiblity and Spotting: The sentence "Infantry in woods or buildings -- as distinct as those concealed at the edges -- may not be seen ... , i.e. if they are more than 4in from the edge they are in effect invisible ..." I am sure you read this sentence, and see no ambiguity! I can understand the first part -- I am either in the building, or hiding behind the edges. But the second part about being 4in from the edge confuses me. Does that mean being entirely shielded by the building? If I have a 4in stand entirely behind a 4in building, am I entirely concealed (and also unable to see an enemy approaching me from the other side)? And, if I am jutting out behind the edge of the building a little, am I in cover and able to spot and fire?

4. Regarding visibility, I put some test stands of infantry in my (neglected, one-week uncut) lawn, and had a wonderful effect of not being able to see the stands if I crouched down. But, if I stood, I could see them. Do you have some gentlemanly agreement about whether you crouch or sit or stand while playing the game? Obviously, the older you are, the harder it is to have fun while crouching. It seems unfair that you get reconnaissance by standing up.

All the best,
Steve