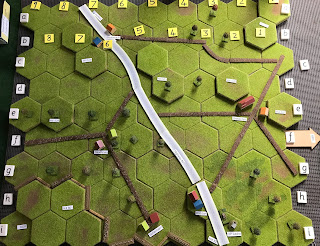 This was another of our linked series of WW3 games set in 1981.  This particular scenario was actually the prequel to the Plugging The Gap game and was set very close to the Inner German Border or, if you prefer, the Anti-Fascist Protection Barrier.Elements of the US 11th Cavalry Regiment were having a tough morning at the hands of a reinforced Soviet Motor Rifle Regiment.  I set up and ran the game on my Hexon terrain with 6mm toys, the players joined my by Skype, having seen their briefings and held staff conferences some days before.  Martin was the 11 ACR, with Simon as the West German local defence forces.  On the other side, Tim C was the representative from Div HQ, with John running the MRR and Richard in charge of the engineers and Independent Tank Battalion attached from division.
Above - the field of battle - East is towards the bottom of the frame and each hex is 1km across.  Part of the IGB can be seen near the SE corner. 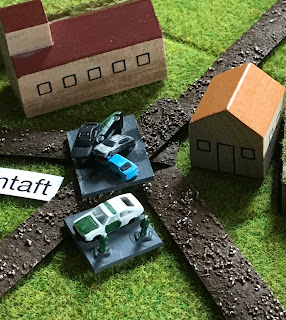 The roads were clogged with fleeing civilians - here the Polizei are in attendance at a particularly nasty pile-up. 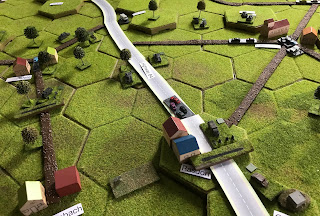 The battalion-worth of German territorials took up defensive company positions in villages.  They were armed with basic infantry weapons. 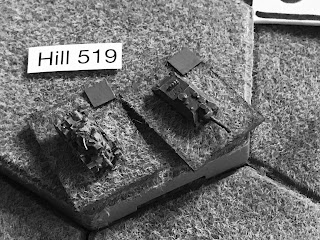 But here comes what Simon referred to as his 'Panzer Division'.  Weak companies of M-48 and JPz Kanone, both with mighty 90mm guns. 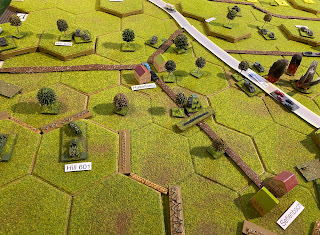 Richards engineers rolled forward to create gaps in the border defences - so surely the main attack would come that way? 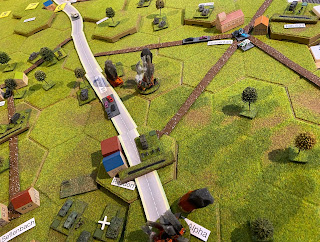 Well no.  Having used artillery to flatten the outpost at OP Alpha  - the columns of smoke at the bottom of the frame - John's early moves seemed to be intent on intimidating the Germans in Rasdorf. 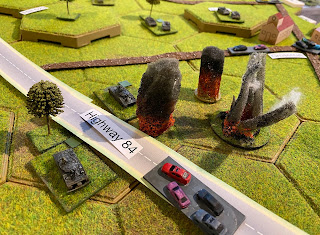 As panicked refugees drove west, the Cavalry took up positions.  A rare and very welcome outing for my Sheridans! 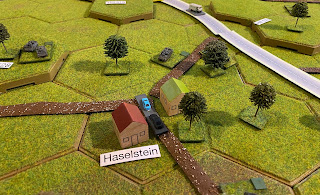 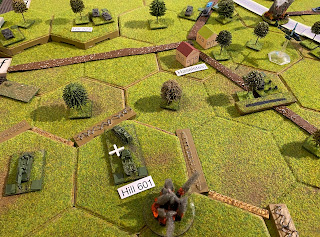 The Sov engineers had gapped the border but were under US artillery fire. 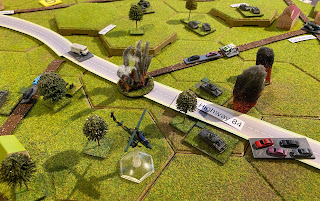 11 ACR seemed well provided with attack helicopters. Missiles from these and the Sheridans had soon ventilated several BMP. 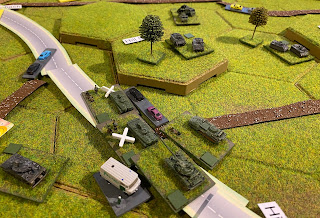 An enraged John violated all codes of decency by crushing civilian cars beneath the tracks of his AFVs. 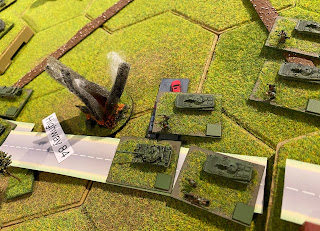 I love it! Sheridans no less!
Look forward to seeing your ww3 rules in print sir.

That was a good game. It was great fun running the Sheridans, even if their aluminimum armour is apparently actually made of tin foil! Delaying actions are hard....

I won't comment on unsubstantiated rumours in the biased Western press.

Duc de Gobin
Sheridans indeed! And some of them old enough to have fought in 1981....

Pete
The Polizei's VW Passat Mk1 is a Z Gauge plastic model, with added shaky paintwork by me.

Martin Rapier
What the Sheridans have going for them are long range AT abilities - so you at least don't have to get too close to the Sovs!

Only if we don't win World War Three!!

Beastly Commies. Now I remember why we were programmed (sorry taught) not to trust them. Isn’t it heartwarming to know we are getting back to normal the Sino-Slavic Bloc or ASBLOC. Anyone remember that reference?