Don't Cry For Me - the truth at last! Falklands War Matrix Game - part 2

Here is the narrative of events from the game. 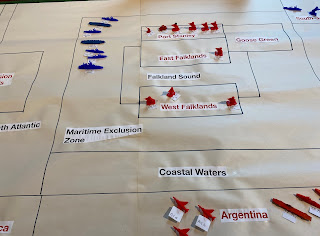 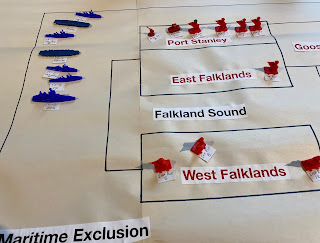 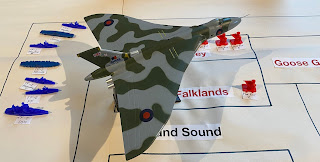 Haig holds a press conference (in his jacuzzi) to urge peace and gain publicity!  His rubber duck becomes a global media sensation.  PDQ supports call for peace.  Chile continues military exercises and invites in the worlds’ press.  Reagan offers UK the loan of USS Guam if the RN loses a carrier.  While carriers and escort linger in NE of MEZ, 3 Cdo Bde and 5 Inf Bde are landed at Goose Green under Sea Harrier cover.  RAF Vulcans (‘one’ according to UK ministry of defence, ‘thousands’ according to Galtieri) bomb the runway at Port Stanley. 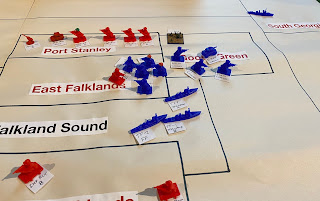 British troops encounter Argentine defences in E Falkland and are hampered by poor weather.  Massive Argentine air raids sink an RFA a frigate and a Type 42 destroyer in Falkland Sound, while Exocets fired from Etendards badly damage the Atlantic Conveyor.  Chile requests helicopters from US in order to be ready for air sea rescue missions.  Pinochet especially requests AH-1 Cobra gunships as they are apparently especially suitable for the role… 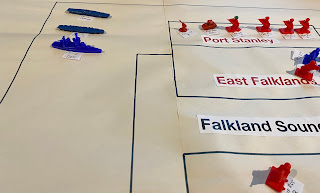 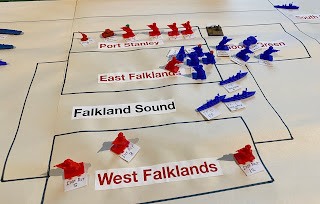 Argentine morale on Falklands starts to collapse and while fighting continues in remote areas, Scots Guards enter Port Stanley and haul down the Argentine flag.  The Junta withholds the truth from the populace and a mass rally in Buenos Aries supports Galtieri.  Pinochet is awarded the Chilean Humanitarian Star.  He and Haig appear on the cover of Time magazine, hailed as men of peace and restraint.

So a broadly historical outcome which remained far from a forgone conclusion right to the end.  In turn eight, there were three arguments which basically said the Brits got to Port Stanley.  Two of them failed....
Posted by Tim Gow at 10:56

Great recap Tim- Thanks for running the game. It was most enjoyable.

Damn. I was rooting for the Argentines, this time. You know - the underdog.
But where did get those fine looking toys?

Pete
And well done Mr President - you made a good job of a sometimes challenging role.

Archduke Piccolo
The toys are plastic playing pieces from various old board games. I bought a carrier bag full of game parts many years ago and despite giving loads away I maintain a box full for such games as this.

I'm delighted to see that the RFAs survived once again, Tim :-)

Chris Kemp
One went down in the big Argie air raid I’m afraid.