Don't Cry For Me - the truth at last! Falklands War Matrix Game - part 1

This week's game was another outing for my Falklands War Matrix Game -
Don't Cry For Me, or how I stopped worrying about the bomb and learned to love penguins 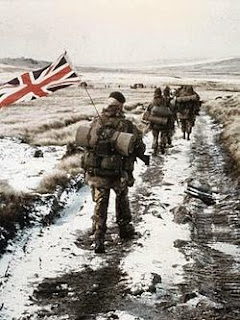 Originally unleashed in 2000, I last ran it to mark the 25th anniversary of the conflict in 2007 and it has subsequently been included in this book:

If you'd like to have the full details of this game and several others you might care to speculate £12.95 on a copy here.My memories of the original game can be found here.


A British task force is being readied and it’s first units, including elements of the Parachute Regiment and Royal Marines, are ready to sail for the South Atlantic.  The British Government has declared a Maritime Exclusion Zone (MEZ) around the Falklands.
The game lasts up to eight turns, each representing approximately 10 days.

The (rather stylised) map was drawn on two sheets of flip chart paper.  Military units were represented by various boardgame parts. 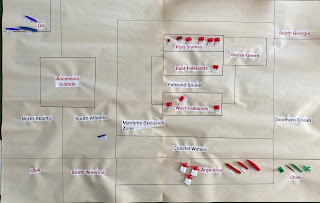 Having set the scene, a future post will present the narrative of events.