On Sunday I again visited the Birmingham show and had an enjoyable day out, this time accompanied by Graham E.  As well as picking up some random toys at attractive prices I met up with several friends - so hello again to Mike, Anthony, Graham A, John and Mike C. As a bonus, we had a very smooth journey in both directions.
Well done again to the show organisers, traders and punters.
Above - the green figures are Black Cat Napoleonic Russians - very rare and beautiful figures. Do I need more Russians?  Er.....  I also found three Barzso 18thC Highlanders. 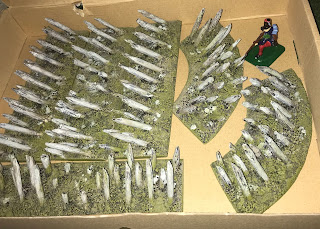 Approximately three feet of stakes makes me think it might be time to revisit Agincourt. The (1/32) figure is there for scale. 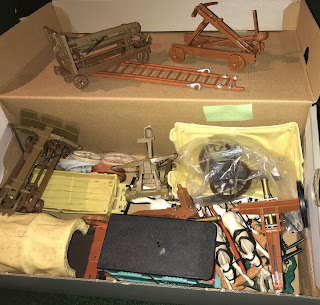 I’d chucked the rest in a box before remembering to take photos. Three Timpo wagons - all a bit tatty, a pair of broken Timpo guns and a quartet of ancient/medieval twangy things. And a still bagged Timpo Gatling. Oh, and a tent.  It may be tat but at least it’s cheap tat!
Posted by Tim Gow at 15:30

Cheap tat it may be but it Looks good. The ballistas. They look like they could be fired ?

Damn, forgot all about it. Meant to go.

Paul’s Bods
I knew I could rely on you to ask the important question! With replacement rubber bands, probably.

David Wood
Next year then?

I feel nostalgic for the 90s and the resurrection of 54mm plastics! Good haul!