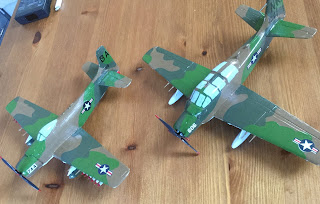 Finally finished. The brace of Skyraiders lies exhausted on my table and await the call to action.
The decals were something of an issue as most of the Revell markings broke up in water and several couldn’t be saved. More rummaging in the decal box produced some which more or less fitted my requirements. Both machines are finished in USAF colours - they’re destined to be used in a game about pilot rescue in Vietnam, where these ‘Spads’ (so called because of their propeller-driven antiquity) flew escort for rescue helicopters and suppressed nasties on the ground. 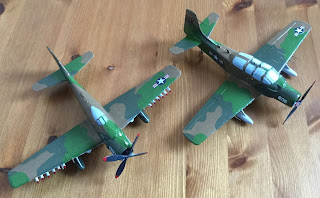 I’ll try to take some outdoor photos in the next few days. 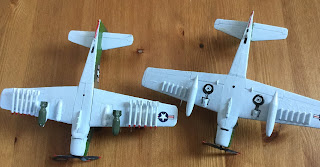 Those turned out pretty good, the only minor quibble I have is the sand color looks a bit darker than I recall on the NAM era birds but, as I said a very minor point.

Those are really great Tim.

Don M
Quite right - but having experimented I felt the brown worked better. As you know, if you want 100% accuracy you’re reading the wrong blog!

Pete
Thanks - it’s nice to have finally built a Skyraider.