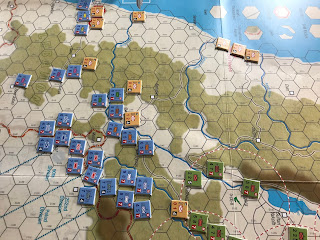 I set this game up few weeks ago but subsequently forgot to post my report.  If nothing else, this game has reminded me that I really don't care for this genre!  But luckily I only really bought it for the map and orbats so no harm done.
Above - turn 1 and the Israelis have crossed into Lebanon.  The blue counters are Israeli, green Syrian and tan PLO. 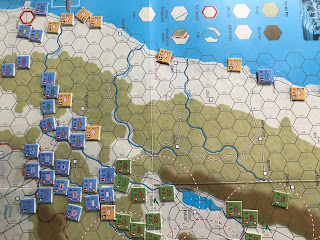 Turn 2 (probably).  The Israelis have made an amphibious landing and are pushing north. 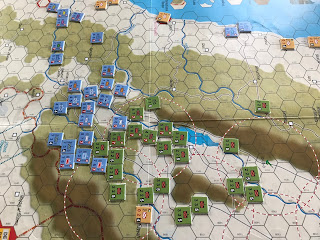 The game is a real slogging match, like the original campaign.... 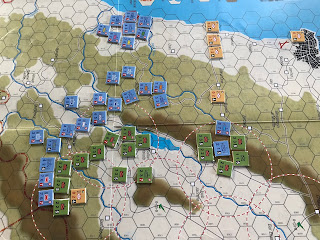 ...and it's easy to get surrounded by the numerous Syrian units! 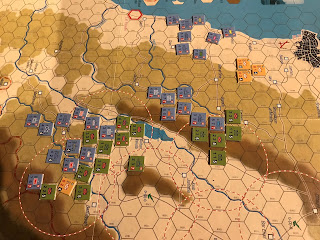 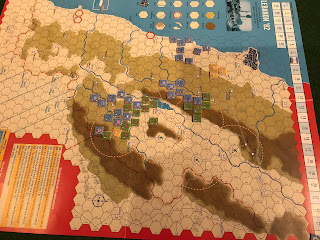 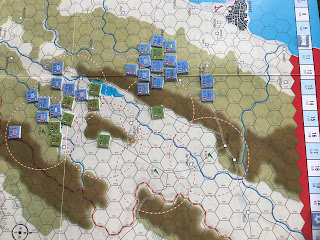 One clever mechanism is the variable game length.  Israeli losses shorten the game, Syrian losses can extend it but not by as much. 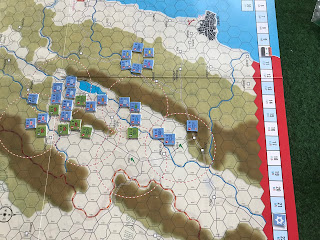 This is as far as I went.  Although Syrian units seem pretty thin on the ground and several SAM sites have been overrun, the Israelis have suffered significant losses.  It's a real challenge for the Israelis as they have to aim for a quick victory - which is costly - while minimising casualties - which is slow. 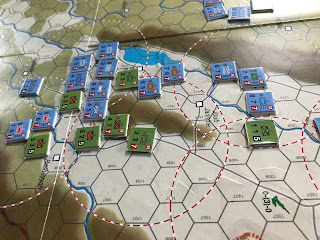 So it is a good little game and reflects my understanding of the campaign.  The map is lovely and the counters well presented.  However, playing a game on a paper map with fiddly wee bits of cardboard doesn't really do it for me.
So recommended if conventional board wargames are your thing.  Or if like me you want it for the map and find it at a sufficiently low price...
Posted by Tim Gow at 10:46

Hi Tim- Yes, I must admit not preferring these types of games...the only time I've played was 'Isandulwana'- Zulu War Colonial - and surprisingly enjoyed it - that was thirty years ago. I however can see the you like to have the MAP- most useful for converting into 6mm and other scales for 3D gaming. Cheers. KEV.

The Israeli OoB (unusually given their normal secrecy) is reasonably accurate when compared with other sources, but I'm less sure about their Syrian orbat.

I've found some differences when comparing it to other sources, to the extent of the brigade numbers and divisional allocation being widely different.

I'd say it's plausible rather than 100% accurate.
Neil

Something like this can be a resource not only for Orbats, but also for campaigns and campaign scenarios. The usefully colour-coded Israeli ORBAT looks easy enough to reproduce using 2 tanks and 2 mechanised infantry stands/ elements per Division, and the front can just about 'fit' my hex table. I infer that the counters were not stackable Pity the PLO and more particularly the Syrian army looks so amorphous - rather an OPFOR look?

I'm tempted to try it out as a 'disguised' scenario...

Ion,
It's probably no surprise to you to learn I've worked out the OoB for both sides at a Megablitz scale, identifying tank and apc types from other sources.
Rather than your 2:2 tank to apc ratio, it depends on division type.
Armoured are generally 3 tank to 1 apc (IDF 2:1) and mech 1 tank to 3 apc at the Brigade level. When looking at brigades to division, it drops to a 2:1 ratio (tank:apc for armoured, apc:tank for mechanized).
Neil

Looks good to me- but then again I'm not adverse to pushing tiny bits of card about... what size unit does each counter represent?

Kev Robertson
I’ve played quite a few such games and enjoyed a few but on balance I’d rather push some toys around.

Neil Patterson
That’s interesting - I’ve not looked at the orbat in detail as yet.

Archduke Piccolo
The Syrian forces included some interesting units - far less generic than you might think.

Neil Patterson (again)
I’ve not yet worked the orbat as I’m not sure I’d want to do this as a Megablitz game. Expect bits of it as Little Cold Wars and/or NBC games.