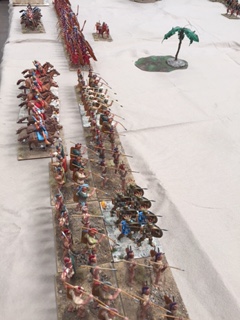 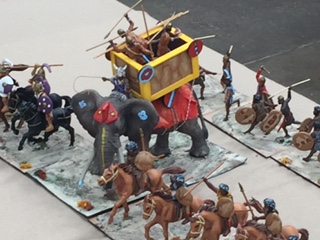 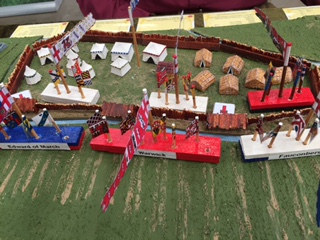 I also played Graham Evans's very splendid Battle of Northampton game.  This is appearing at several shows and I urge you to have a go. It features no toy soldiers whatsoever - the large blocks represent 'battles' and banners are removed to reflect casualties.  I managed to suffer a sound defeat but I feel that my pre-battle burning of Northampton was at least a moral victory!
Posted by Tim Gow at 14:59

Thank Dickens for cheap(ish) 1/32. My eyes can't do smaller anymore.

Stephen Briddon
To be fair, you are looking at them from several thousand miles away....

LOL, that's alright Tim, I can't control my spending demons either....)
But at least you had fun!

I always love to see elephant conversions. And the Punic Wars let you use all those African elephants. I often wonder if the Carthaginians ever used any of the bigger African elephants or only the North African ones (now extinct.

What are the light cavalry made from?

Don M
I think I'll run out of space before you!

James James
I suspect most of the figures are by HAT - but i only had a brief chat with the presenter.

Martin Rapier
And with your heavy investment in 1/72 HAT, you'd know!